Much came together for me under the dimly-lit roof of San Diego’s SS Fantasea, just hours prior to the highly anticipated CRSSD experience.  A new and growing love for electronic music and its fans, a vivid understanding for the unconditional passion that is shared between some seriously sweet drops and an appreciation for the genre itself and its pioneers.

The gracious onesie and shipper robe-bearing flock, known only as the Holy Ship Reunion that was once fatefully pulled together by a single cruise, impatiently awaited the twice-annual CRSSD festival event.  As they stepped vigorously to the sicks beats of GDI (God Dammit Ian,) Frosty and Outside In Record Label artist Zander for hours on end, drinks seemed to be dancing, beats were flowing and it really was just a good time. 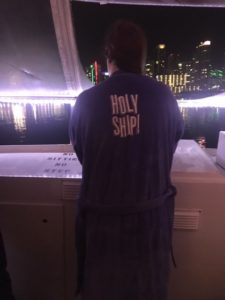 As a willing and hungry bystander that was graciously invited onto the boat, I could both see and feel the significance of the communal event before I even crossed from land to sea in a single step.

And, let me say, it definitely pays off to pay for a cruise around the calm, breathtaking San Diego bay at night. The distant, bright lights of buildings bounced off the water’s semi-stagnant reflection and almost seemed to ricochet into the wavelengths of each and every drop that hit the SS Fantasea at the hands of these talented artists. 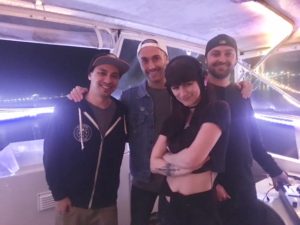 Most traveled from Seattle to board the celebratory festival cruise, especially team GDI composed of DJ’s Emma and Chris. Often we think of CRSSD as a local event collecting transplants and San Diegans but many forget the diverse and other-stately crowd that the festival pulls in with its star-studded lineup and pure love for indie electronic music. 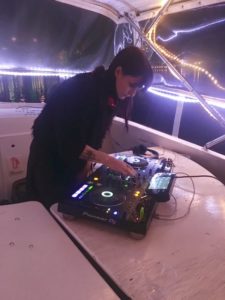 Emma killing her mix as GDI without Chris for a minute.

Among the crew was an artist by the name of Frosty who seemed to know Zander quite well from their Holy Ship! adventures. Just as friendly and inviting as the GDI duo, Frosty’s fresh beats hit the charged up crowd like a powerhouse wave of emotion and energy that couldn’t be controlled. 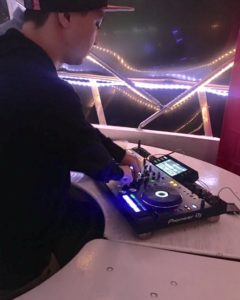 Frosty getting into it.

Although meeting these incredible artists was a major highlight, my true goal for the night was to get to the heart of Zander. Given a chance to chat with one of the co-founders of Outside In, I used the opportune moment so thrived upon to chat about his most recent musical excursion to Costa Rica’s Envision Fest. Knowing that this was his fourth trek out to the exotic jungle beach, I was interested to see how he felt about the event and its evolution since he was first welcomed.

As we had only briefly chatted about Envision through email before meeting, I had noticed his main written focus seemed to be the sustainability of the event as one that actually implemented the communal morale it projected through promotion. He sincerely proved to care about the message in person, just as we had discussed, that such an authentic event can send out powerful meaning into the universe; rather than the standard, sell-out vibe of festivals that unfortunately do not practice “what they preach.”

Impressed by his yearning and passion for something better, it all came together between the sweet sets and unreal Holy Ship fam energy:  Zander is real. Amongst a thick swamp of mainstream label-fueled electronic DJ’s, Zander is one to not only be heard, but to appreciate.

Throughout his final set, Zander had a wave of friends, support, love and energy encompassing him as he expertly dropped track after throbbing track. They began chanting his name as if a strategical siren-like call, all the while grooving and dancing on the deck of the rocking ship. Pulsating synths to make your ears steam, smooth interludes and beats on end, his mixes were like a drug I could not shake. 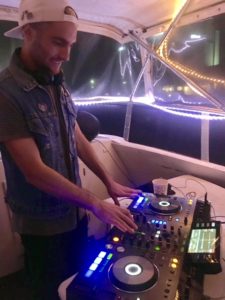 Zander mixin’ it up for the crowd.

As I had originally anticipated Zander to be the only artist performing the event, the true magic rested in his undying support for friends GDI and Frosty while they all spun together.  A true professional, a new friend, a talent and a real voice in the independent industry, look out for Zander.